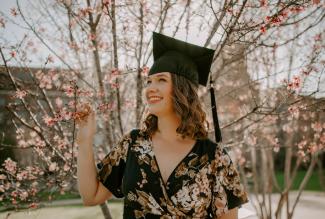 Here’s How to Start Saving for College

It’s hard to gauge what you’ll need to save for your child’s education, considering all of the variables involved. However, a good rule of thumb can get you started.

High school graduations are approaching, another class of students is heading to college and parents still aren’t sure how to save for their education.

Fortunately, even a little bit each year helps.

According to a survey from Fidelity Investments, nearly half of U.S. parents are looking for any help they can get when it comes to saving for college. Roughly 70% want specific guidelines for how much they should be saving, which would be helpful considering that average family is currently on track to save only 29% of the amount of college costs they intend to cover by the time their child graduates high school.

“Every family’s situation will be unique, which means there isn’t a one-size-fits-all answer to the question of how much to save,” says Keith Bernhardt, vice president of college planning at Fidelity. “However, for many, a savings rule of thumb provides a much-needed starting point from which families can build a more robust plan to meet their goals.”

For its part, Fidelity suggests the “2K Rule of Thumb,” which provides a rough estimate of what parents should be saving. Assuming that they want to cover 50% of a child’s annual college costs out of savings, their rule of thumb suggests multiplying your child’s age by $2,000. If your child is seven years old, you should have $14,000 saved to stay on track. That assumes you’re going to continue saving at the same rate and that your child will be age 18 come time to head to campus.

If that’s a little too vague, you can always drill into the details a bit. According to College Board, the current cost of a four-year in-state public college averages $20,090 per year. By comparison, the annual cost of for a four-year private college is $45,370. Covering half of either of those totals will require more than that $2,000 a year, but it depends on your goals. If you’re good with your savings, grants, scholarships, and even your child’s income covering the rest, that $2,000 a year may be all you need.

“Kids grow up fast, which is why your savings plan needs regular attention in order to make adjustments as needed well before college arrives,” says Bernhardt. “At least once a year, take the time to ask and answer whether you’re on track to reach your goals. If you find yourself falling behind, don’t be discouraged. There are steps you can take to bolster your savings efforts now to alleviate financial stress later.”

A Fidelity Investments study found that 72% of American families are currently saving for their children’s higher education—a 24% increase since the first year the study was published in 2007. The study has also seen a 62% increase in the use of college savings accounts, such as 529 plans. In fact, 41% of families report using a a 529 college savings account, well more than the 26% in 2007.

That’s surprising, considering that 72% of respondents told financial firm Edward Jones that they have no idea what a 529 plan is, including 54% of those making $100,000 a year or more. The 529 plan has been around since 1996 and has allowed Americans to increase college savings tax-free and exempt the gains on those savings from taxes once they’re withdrawn to pay for college. Yet only 28% could correctly identify a 529 plan as a college savings tool from among four potential options. This is somehow down from 37% in Edward Jones’ first 529 survey from 2012 and down even from 34% in 2015. It’s a big reason why even a 529 plan may not be enough.

“While families have adopted more active and effective savings habits over the past decade, this year’s study still finds that on average, parents are on track to reach just 29% of their college funding goal by the time their child heads to campus,” Bernhardt says. “Parents still need help identifying how to maximize opportunities to save while meeting other family financial demands, and how to invest that savings in order to help their college dollars grow.”

As a result, parents have to make a lot of even tougher financial choices just to afford their child’s college education. Among 71% of families, having a child live at home or graduate earlier is a viable option—up from 53% in 2007. Also, three-quarters of parents are considering having their non-working spouse go back to work or having their child work on campus to make ends meet.

Among all of these parents, however, they’re saving just $3,000 a year. That’s up from $1,500 in 2007, but still fairly low when parents plan to pay for 70% of their child’s college education—compared to just 57% in 2012. With 80% saying that their own experience with paying for college and managing student loan debt are driving their decision, it’s a little surprising that, as HSBC Group discovered, 60% of parents would be willing to go into debt to fund their child’s college education.

With 98% of U.S. parents looking to send their kids to college, parents are willing to take a big hit. Roughly 60% of parents say that paying for their child’s education makes it more difficult to keep up with other financial commitments, but they consider student loan debt than long-term savings (40%), credit card repayment (37%), and retirement savings (37%). As a result, U.S. parents spend an average of $14,678 a year to fund their child’s college education, or almost double the global average of $7,631. Even at that, students are stuck paying 37% of college costs, second only to students in Canada (39%) and well more than their contemporaries in Egypt (less than 1%), India (1%), Hong Kong (4%), and Singapore (5%).

“The financial sacrifices that parents are willing to make to fund their children’s education are proof of the unquestioning support they will give to help them achieve their ambitions,” says Charlie Nunn, HSBC group’s global head of wealth management. “However, parents need to make sure that this financial investment is not made to the detriment of their own future well-being.”

That’s where the 529 comes in. Parents saving in a 529 plan are contributing a median of $3,500 per year, with 45% boosting their contributions within the last year. Even those increases aren’t helping, as 49% of parents think they won’t hit their savings goal.

Yet parents aren’t giving up. Bankrate.com found that 73% of U.S. workers consider college to be a good investment, including 88% of those ages 18 to 25. College-educated parents are particularly adamant about sending their kids to college, with nearly 90% of college graduates saying their education was worth the cost.

“Making an investment in higher education can lead to greater opportunities with larger income potential,” says Steve Pounds, Bankrate’s personal finance analyst. “However, with the current tuition prices people need to mindful of the return on their investment and making sure they can manage any debt incurred.”

According to the Federal Reserve Bank of New York, total student loan debt reached $1.21 trillion by the end of 2016. That’s up $78 billion from a year earlier and is the second largest pile of U.S. consumer debt behind mortgage debt (at $8.48 trillion, up $231 billion from a year ago). More than one in 10 student loans are past due. That’s a worse delinquency rate than for credit card bills, of which 7% are past due.

It’s why many parents are embracing opportunities that either weren’t available when they were in college or that they didn’t take complete advantage of. Parents with older kids in 10th grade and up wish that they had opened 529 accounts sooner, treated college savings like a monthly bill, boosted college savings by 1% or more each year, and opened a cash-back card with rewards funneled into a college savings account.

“For many families, finding an extra $50 or $100 per month may seem out of reach, but these extra dollars could potentially boost college savings by nearly $20,000 or even $40,000,” Bernhardt says. “This potential could be a powerful motivator to consider strategies to carve out additional savings.”