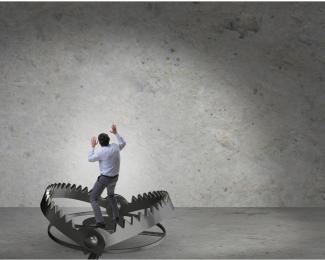 How to Dodge the Top 3 Roth IRA Tax Traps

The promise of tax-free distributions is one of the primary reasons why an individual might choose a Roth IRA over a traditional account. But ‘premature’ distributions could cause a Roth distribution to be taxable.

These tax bills often come as a surprise to Roth IRA owners and beneficiaries who are unaware that they must meet certain eligibility requirements for their distributions to be completely tax-free.

Trap: Having income taxes withheld when requesting a Roth conversionmight subject the withholding amount to a 10% additional tax.

Example: Assume that John requested his $100,000 traditional IRA balance to be converted to a Roth IRA and elected to have 20% withheld for income taxes. Assume too that the entire amount is attributed to pretax assets and would therefore be fully taxable.

The results would be as follows:

Consider too, that the amount withheld for income tax would not benefit from the tax-deferred (and potentially tax-free) growth available to the Roth IRA.

Solution: The IRA owner can avoid this 10% additional tax by paying the withholding tax with funds held outside of a retirement account.

Trap: Taking a distribution of earnings before being eligible for a qualified distribution will result in income taxes being owed on the amount.

A distribution from a Roth IRA is tax-free if it’s qualified. Such an amount is also not subject to the 10% early distribution penalty.

A Roth IRA distribution is qualified if it meets the following two requirements:

If a nonqualified distribution includes earnings, the earnings amount would be subject to income tax. Further, if the distribution is made while the Roth IRA owner is under age 59½, the amount is also subject to a 10% additional tax unless an exception applies.

Tina is not eligible for a qualified distribution.

She takes distribution of her entire Roth IRA balance. The tax consequences are:

Solution: If the IRA owner is not eligible for a qualified distribution, avoid taking distribution of amounts attributable to earnings.

3. Recapture tax on distribution of taxable conversion before 5 years

Trap: Taking a distribution of taxable conversion amounts before the 5-year period could result in the 10% additional tax.

Example 1: Assume that 45-year-old Angela converted $100,000 to her Roth IRA in 2017, all of which was from pretax funds. Even though she is under age 59½, the conversion was not subject to the 10% early distribution penalty as it qualified for the Roth conversion exception.

Assume too, that the conversion is the only amount Angela ever added to a Roth IRA.

If Angela takes a distribution of $20,000 from her Roth IRA in 2018, the amount would be subject to a 10% additional tax (unless she qualifies for an exception), because the distribution occurred before the conversion aged five years in the Roth IRA.

Example 2: Assume that 55-year-old Tom converted the following amounts to his Roth IRA:

Assume too, that these conversions are the only amounts that Tom added to his Roth IRAs.

Solution: Keep track of Roth conversion amounts by year, to determine if a distribution would be taken from an amount that has been converted for less than five years. Where possible, avoid taking distributions from such amounts, unless an exception applies.

If distributions from a Roth IRA are nonqualified and occur before the Roth IRA owner reaches age 59½, the following should be considered:

Under the ordering rules, these amounts are considered distributed after-taxable conversion amounts.

Roth IRAs help to provide the tax diversity that is often considered necessary for efficient retirement income planning. And, in an ideal world, distributions would not be taken from Roth accounts until the owner is eligible for qualified distributions.

But clients sometimes find themselves having no choice but to take premature and unplanned distributions from their retirement savings accounts, including their Roth IRAs.

Regardless of when a distribution occurs, advance distribution planning is often necessary to minimize any tax impact.

To that end, encourage clients to consult with you before requesting distributions from their Roth IRAs and other retirement accounts. You can help them determine if it is more tax efficient to use funds from sources other than IRAs in order to achieve maximum tax efficiency.