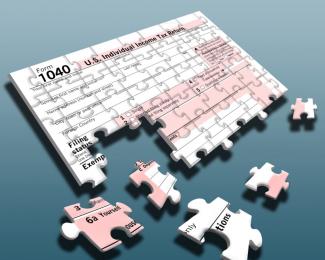 Key Thoughts on the Tax Cuts and Jobs Act

The Tax Cuts and Jobs Act has made major changes to the tax code. It’s important that you understand these changes to best plan your tax strategy going forward.

The Tax Cuts and Jobs Act has brought the biggest tax overhaul in 30 years and has left many with questions. It’s important that you understand how the elimination of deductions, compression of tax rates, and brand-new benefits for certain taxpayers will affect your tax strategy. According to the Tax Policy Center, four out of every five taxpayers can expect a reduction, but for many lower-income taxpayers, that tax cut will be so little it may hardly even be noticed. And if you live in a high-tax state or you rely heavily on deductions, you are likely to see a tax increase.

Every taxpayer will need to assess their individual situation. Here are some initial thoughts and areas to be discussing with your financial advisor. Of course, any advice below is subject to your specific tax situation, with consideration to your state of residence and AMT, among other things.

The SALT deduction previously allowed taxpayers to deduct state and local taxes to avoid being taxed on the same income twice. Reduction of the SALT deductions will be most acutely felt in the six states that account for half of the value of these deductions: California, Illinois, Maryland, Massachusetts, New Jersey, and New York, according to the Tax Foundation. If you live in one of these states, you should talk to your financial advisor about your overall financial plan, as the elimination could affect cash flow and the value of your home.

Previously, a typical couple with two homes in one of these high-tax states was able to lower their ultimate tax burden by 25%. Now, their tax burden has actually increased, and these folks may want to consider tax-friendly states such as Texas, Arizona, or Florida.

If you are committed to living in a high-tax state and are unable to move or declare residency anywhere else, there are a few tax-smart moves that could help your situation.

The elimination of the deductibility of miscellaneous itemized deductions for tax preparation fees, investment fees, moving expenses, and employee expenses means we should reconsider how and when we pay expenses. Confirm whether your employer is unable to absorb those business or moving expenses that you may currently be paying out of pocket, or perhaps consider cutting back in those areas.

If you donate to charity

Charitable contributions are another area that will be impacted by the tax law changes. Due to the expansion of the standard deduction to $24,000 per couple, it is likely that fewer people will itemize deductions going forward. In the past, about 30% of taxpayers currently itemized, but it is estimated that fewer than 10% will itemize in the future as a result of the new Tax Act, particularly if you live in states with little to no income or real estate tax.

If you take the standard deduction rather than itemizing, you cannot take deductions for charitable contributions. What you can consider, however, is opening a donor-advised fund and prefunding it with several years of donations. Once you fund the account, you can then take one large up-front deduction, potentially itemize that year on your tax return, and then spread the distributions to the charities in future years when you are using the standard deduction. Essentially, it allows taxpayers to separate the act of donating from the actual year of deduction, which is a newish concept but may make sense under the new law.

And if you are age 70 ½ or over, don’t forget the Qualified Charitable Deduction (QCD) which allows a taxpayer to donate their RMD directly to charity up to $ 100,000 per year, thereby essentially decreasing their AGI.

If you own a pass-through business entity (lucky you, I think)

Everyone who owns a small business and has pass-through income should be asking what they can do to take advantage of the new 20% deduction aimed at pass-through business owners. By taking advantage of the qualified business deduction, a couple with a small business that has less than $315,000 of income could pay almost $20,000 less in taxes. However, higher-earning doctors, lawyers, accountants and investment managers could have net tax increases despite lower tax rates, as they will lose most of their state and local tax deductions.

If you have large amounts of pass-through income, reconsider whether you should change your business entity to a C corporation to take advantage of the new 21% top tax rate. Service firms that are looking to expand or who have cash flow they don’t need to pay out should look hard at becoming a C corporation.

Careful with Roths (but we still love ’em)

This means that if you perform conversions in the future, they will require additional thought. You should discuss a conversion with your financial advisor before taking any action to make sure it is the best move.

The final tax bill also expands the use of Section 529 Plans allowing the distribution of $10,000 per year to cover the cost of K-12 expenses and can provide planning opportunities for families wanting to pay for private or religious or home school expenses through the use of the preferred vehicle. This allows for additional flexibility and is just another reason that you should consider Section 529 Plans for all types of educational funding.

If you are getting divorced

Beginning in 2019, the tax bill changes the treatment of alimony in one important way. Under the Tax Cuts and Jobs Act, alimony is no longer treated as deductible for the payor, nor is it treated as income for the payee beginning in 2019. Due to this important change, divorcing spouses may consider property settlements over alimony in the future. In addition, the new Tax Act may decrease the transfer of payments or property from one spouse to another, if there is no income tax deduction available to the payor spouse. Obviously, the non-deductibility of alimony needs to be considered in all property settlements and divorce negotiations going forward.

Although the Tax Act was publicized as a way to simplify taxes, it will be anything but. You should talk with your financial advisor if any of the changes described above apply to your situation.