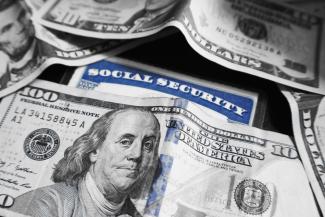 How Social Security Benefits Keep Up With Inflation

With inflation a top concern among Americans these days, clients may be wondering how Social Security’s cost-of-living adjustment is calculated. Our expert explains.

With inflation dominating the news, clients may be developing more than a passing interest in how the Social Security cost-of-living adjustment (COLA) is figured. Whether it’s a matter of simple curiosity or an effort to maximize benefits through strategic claiming, clients should know how Social Security keeps up with inflation—both before and after retirement.

First, let it be said that Social Security is one of the few sources of predictable, inflation-adjusted lifetime income available to retirees. This, by itself, is a reason to maximize benefits through strategic claiming. Compared to the task of repositioning investment portfolios for an inflationary environment, maximizing one’s inflation-adjusted Social Security benefit is easy—just claim at the optimal age and let Social Security’s automatic inflation adjustments raise the income each year at a rate that keeps up with rising prices (though on a lagging basis and not necessarily matching a client’s own spending experience).

Before we get into how it all works, we must acknowledge that some clients have a misguided notion of the optimal claiming strategy with regard to the COLA. More than a few people have asked if they should claim their benefit early in order to get the COLA. The answer is a resounding “No!”

All PIAs are raised with the COLA, whether or not benefits have been claimed. In fact, the optimal claiming strategy with regard to the COLA is to claim at an age that will provide the highest possible benefit—age 70 for retirement benefits and FRA for spousal benefits—because that will maximize the dollar amount of the COLA.

The COLA is based on the Consumer Price Index (CPI), which measures price increases of goods and services from year to year. The CPI usually makes the headlines when it’s announced each month, especially this year, when inflation is running higher than normal due to supply chain disruptions caused by the pandemic, commodity shortages caused by the war in Ukraine, and other factors creating an imbalance between supply and demand.

It is not known how long such conditions will exist. The Federal Reserve Board is working to tamp down inflation by raising interest rates, but it is not known what impact the Fed’s actions will have since we’ve never been in a situation exactly like this, where prices are rising but wages are not, despite a low unemployment rate.

For clients who want to delve deeper and seek to understand how the CPI itself is figured, send them to the Bureau of Labor Statistics. Here they’ll find a complete primer on the Consumer Price Index, including concepts, data sources, design, presentation and history.

Some argue that the CPI-W is not a good index for the Social Security COLA because it measures spending by urban wage earners, not retirees. It also doesn’t take into account changes in buying habits when inflation is high—substituting chicken for steak, for example, when there’s a spike in beef prices. At various times people have claimed that the CPI-E, which measures spending by the elderly, or the “chained” C-CPI-U, which takes buying substitutions into account, should be used instead. But in the end it doesn’t make much of a difference. There have been years where the CPI-E would have provided a lower COLA than the CPI-W and the C-CPI-U would have provided a higher COLA. So it all evens out.

For clients who want to know exactly how the COLA is applied to their Social Security benefit, you might refer them to the SSA Office of the Chief Actuary. Here it explains that the COLA for 2022 equals the percentage increase in the CPI-W from the third quarter of 2020 through the third quarter of 2021. In figuring the COLA, SSA uses the raw index, which stood at 100 in 1982–84. It averages the index for July, August and September of 2020 and 2021 respectively, subtracts the 2020 average from the 2021 average, and figures the percentage gain. That difference was 5.9%.

So in December 2021, SSA’s automated system raised the PIA of everyone age 62 or older by 5.9%. For those who had already claimed their benefit, the system then applied the appropriate reductions or credits for early or delayed claiming and adjusted January checks accordingly. (This has the effect of simply raising everyone’s checks by 5.9%, but the fact that the COLA was applied to the PIA, after which reductions or credits are applied, is important for understanding that all PIAs are raised by the COLA, whether or not benefits have started.) For those who had not yet claimed, the PIA was raised by 5.9%; the reductions or credits will be applied at the time of claiming. Auxiliary benefits such as spousal, survivor or dependent benefits are also adjusted as the PIA on which they are based is adjusted.

Some people are trying to get a jump on the 2023 COLA by checking the inflation rate over the past 12 months and extrapolating it out. According to the latest release, the CPI-W in May was 9.3% higher than a year ago, suggesting a rather large COLA for 2023. Those who want to be a bit more precise can compare the raw index in May (288.022) to the third quarter average in 2021 (268.421) which would result in a possible COLA of 7.3%. But there’s four months to go before the COLA will be calculated and a lot can happen between now and then—even a possible decline from May’s index as prices revert to more normal levels.

To understand how Social Security benefits keep up with inflation for people who are still working, it is necessary to understand how the benefit is calculated and how some of the components in the formula are adjusted for inflation.

The PIA is calculated for each person the year they turn 62. In calculating the PIA, SSA tallies up all earnings through age 61, indexes each year’s earnings for inflation (except earnings for ages 60 and 61, which are recorded at nominal value), averages the highest 35 years of earnings to get the AIME, segments the AIME into three tiers based on that year’s bend points, multiplies each tier by a set percentage—.90, .32 and .15—and then totals these dollar amounts to get the PIA.

The PIA is the benefit the person will receive if it is claimed at full retirement age (FRA). If claimed before or after FRA, the benefit will be reduced or increased as shown in this table. Once the PIA is calculated, it is adjusted each year for the COLA as described above.

A maximum earner born in 1960, whose PIA is calculated in 2022, has a PIA of $3,357.50. The PIA is the amount he’ll receive if he claims his benefit at his FRA. But by the time he gets to FRA, in five years, the PIA will have been adjusted for inflation, so the amount he actually receives will be higher. If he waits until age 70 to claim, he’ll get three additional years of COLAs (compounded) plus delayed credits of 8% a year (not compounded), giving him the highest possible benefit.

Inflation adjustments for current workers happen in the indexing factors and bend points, which rise each year based on increases in the national average wage index (AWI). Workers under 62 can be assured that by the time their PIA is calculated the indexing factors and bend points will be higher than they are today, resulting in a higher Social Security benefit. To put it simply, benefits rise with wages while people are earning (before age 60) and with prices while they are spending (after age 62).

The wage index is a lagging indicator. Whereas the COLA is based on the prior year’s CPI (third quarter to third quarter), the indexing factors and bend points are based on the AWI two years prior. This can cause a bit of a disconnect. Usually the AWI exceeds the CPI, but in 2020—the index used in calculating PIAs for 62-year-olds in 2022—it didn’t. The 2020 AWI rose just 2.83% over the 2019 index, compared to the 5.9% COLA.

This can cause some inequities among cohorts. This year’s 62-year-olds (the 1960 cohort) didn’t get the COLA because their PIAs were only just calculated this year—and their indexing factors and bend points were based on a lower-than-usual increase in the AWI. Next year, the 1960 cohort will get the (presumably high) COLA along with everyone else over age 62, but the 1961 cohort, who will be having their PIA calculated in 2023, will not. Their increase will depend on the amount by which the 2021 AWI exceeds the 2020 AWI of 55,628.60. Wage statistics are not as easy to track as the CPI, so there’s really no telling what the 2021 AWI increase will be or what those indexing factors and bend points will turn out to be.

As you can see, adjusting Social Security for inflation is exceedingly complex. It may not be perfect, but it’s not bad. Social Security does a better job than most sources of retirement income in helping retirees keep up with the rising cost of living