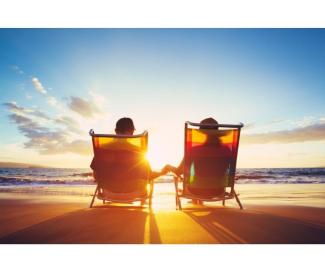 Is Relocation the Right Move for Retirement?

Planning for retirement often focuses on wealth creation, and for good reason: Higher rates of earning and saving equate with a stronger, more reliable retirement plan. But the spending side of the accounting ledger deserves no less attention.

For some clients, relocating can be a major variable for reducing living expenses and perhaps earning a hefty one-time boost to net worth by selling one house and buying another in a less costly area.

Conceptually, the choice to relocate is the equivalent of lifting performance in an investment account or earning/saving more during working years. A recent estimate of retiree spending in nearly 400 metropolitan areas of the U.S. serves as a reminder that where a client retires can be a critical factor for the reliability and success of a retirement plan.

Consider how the extremes compare: the most expensive metro area for retirement versus the least expensive. Retirees in San Francisco need more than $1.5 million in savings to fund (assuming a 4% withdrawal rate) an estimated average annual spending amount of roughly $62,000, according to a recent study by Magnify Money. At the opposite extreme, the average spending rate per year is nearly half as much in Jackson, Tenn. ($37,211) and the required nest egg is less than a third as big (just under $496,000).

Although few, if any, clients are likely to exploit such extreme cost differences, there are plenty of relatively plausible relocation opportunities that can still provide significant savings. For example, moving from Phoenix to Staunton, Va. reduces the average annual retiree spend by nearly 11% while the required size of the nest egg to finance the spending is 19% smaller. Those are hardly game-changing reductions, but it’s certainly a substantial difference, especially when combined with thoughtful retirement planning choices on other fronts.

While relocation offers a potentially big opportunity on paper, it’s complicated in practice, says Donna Wood at Wood Smith Advisors in Franklin, Tenn. “Moving involves emotional decisions,” she reminds us. The allure of lower taxes and living expenses is a factor, but there are personal issues tied up with relocating as well, she notes.

Favorite vacation spots often figure highly on the short list of potential address changes. But practical matters tend to reframe such ideas. Growing older tends to bring greater demands for health care, for instance, and so a key question arises: Will you have easy access to quality health care when relocating?

Ranking states based on health care tends to paint a different picture from looking at locations based solely on cost of living, according to analysis by U.S. News & World Report.

There are other quality of life issues to consider, too, says Wood. “How are they going to network? Are they moving closer to friends or family?” She notes that she avoids talking people into or out of a relocation decision and instead tries to offer objective guidance, in part by analyzing the numbers and comparing several scenarios with software tools MoneyGuidePro and eMoney.

Estimating how taxes compare is usually on the short list of key factors to consider. “We have lots of clients looking to relocate,” says Leon LaBrecque, who heads up planning strategy at Sequoia Financial Group in Mayfield Heights, Ohio. A priority is discussing the tax aspects of different locations—low-tax versus no-tax states, for instance. But tax burdens come in multiple dimensions and so there are multiple tax consequences to consider, like homestead versus income taxes, he notes.

Taxes are always topical, but recent efforts by states to raise income taxes or at least consider the possibility have heightened the stakes for doing your homework. The good news: more than a third of U.S. states have no taxes or flat-income taxes, according to TaxFoundation.org. In other words, there are at least 18 states that potentially offer significant reductions in taxes relative to the other 33.

Figure 1: State Taxes Can Be Tricky

Keep in mind, however, that states can pinch residents in several ways and so it’s crucial to examine the details. A low- or no-income-tax state, for example, may be onerous with property taxes or sales taxes. Meanwhile, some states tax Social Security benefits—13 in all, by one estimate.

Look beyond the numbers

Quantitatively comparing relocation possibilities is important, but even if the data makes a strong case for moving, it’s crucial to consider the qualitative changes.

Moving is rarely a no-brainer, says Jeremy Kisner, director of financial planning at Surevest Private Wealth in Los Angeles. “Live where you want to live,” he advises, since there are usually tradeoffs regardless of your address. Decisions to relocate and downsize are usually less driven by financial decisions and more about a house that’s too big, he notes. “It’s a lifestyle decision.”

While estimating the cost savings is straightforward, deciding if the lifestyle change is acceptable is more complicated. Giving up friends, a reliable support network for health care, access to big-city events, and so on, can be traumatic, and not always obvious until you’ve spent time in a new locale. “If you’re worried about money, you should change your housing,” Kisner advises. But there may be options for staying put. For example, retirees with a lot of home equity can tap into reverse mortgages rather than sell.

Emotional decisions to relocate triggered by a vacation to an exotic locale are especially risky, says Evor Vattuone, president of Aspire Planning Associates in Walnut Creek, Calif. “I talk them out of it if it’s a time-share or multi-partner deal.”

For clients who still want to move, he encourages renting in the new locale for six months to get a feel for what’s in store. A week or two on vacation can be misleading if you’re staying in a five-star hotel. Perceptions can change when you’re shopping for groceries and doing other chores, he cautions.

“As my clients reach the retirement red zone, which I define as five years before retirement, I have them paint me a picture of how they see retirement,” says Ashley Folkes at Bridgeworth Wealth Management in Birmingham, Ala. “Then, when we dig into where they want to retire and live, several discussion questions arise.”

For some clients, proximity to the kids and grandkids, like-minded people and other social aspects determine if a move will be successful or not. Politics can play a role, too—red states versus blue states. Having a discussion on such matters, in context with reviewing how the numbers stack up, offers a form of reverse engineering the answer.

“This process allows us to start with the end goal in mind and work backward,” Folkes explains. “Then we transition into creating some projections to see if this is possible in the current trajectory. If not, we discuss what saving and spending steps we need to take to make this a reality.”

A relocation plan might look attractive on a financial basis from the 30,000-foot view, but most people in or near retirement don’t move and when they do it’s usually for personal reasons.

A study based on the 2010 census, for example, found less than 6% of people at least 65 years old had moved in the past year. For those who changed their address, 83% moved within their current state. The most common reason to move for retirement? Moving closer to family and friends.

Nonetheless, recent survey data suggests that moving for retirement has become increasingly popular over the past decade. According to U.S. Census Bureau numbers, 35% more people moved for retirement in 2019 compared with 10 years earlier. Although the numbers bounce around a lot from year to year, the trend is clearly rising, reports the moving-service company Hire A Helper. 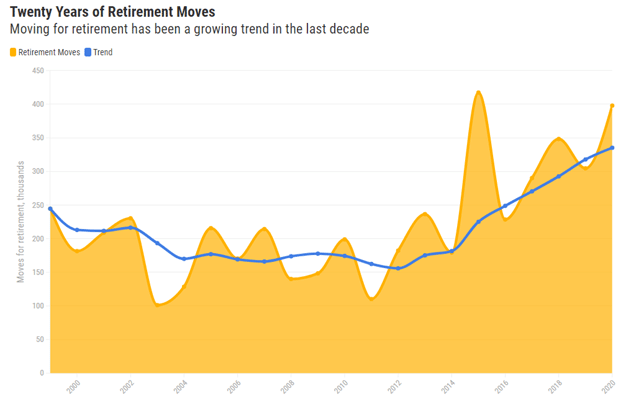 The most popular relocation states for retirement? Virginia topped the list in 2020 with roughly 15% of the flow of Americans moving in retirement, followed by Florida, Wyoming, Pennsylvania and Idaho.

Even if the financial aspect isn’t dramatically compelling, there may still be sound reasons for relocating in retirement. A study by the Center for Retirement Research at Boston College found that moving for older Americans can be a contributing factor for enhancing psychological well-being.

There are no guarantees, of course, but one thing is clear: successfully relocating in retirement is rarely an accidental decision or driven by emotion. Details, in short, matter. Relocating, after all, is complicated. But that’s good news for financial advisers.

Developing a customized plan to help clients think clearly about relocating is another opportunity to demonstrate your value and strengthen relationships. Even better, clients genuinely need informed advice on the topic. Moving, after all, is a rare event for most of us, and so most folks have minimal context and experience for developing objective insight. Therein lies a natural opening for providing financial-planning guidance and strengthening advisor-client rapport along the way.